skip to main | skip to sidebar

For more birdlouise blog go to http://sciencecrochet.blogspot.com
Posted by Louise Bird at 27.7.09 No comments:

A Sub-Group of The Infinite.

Thursday 16th July 2009. Last official project day.
What a strange feeling.
Just filled in the ACW report, only about £6 something over budget.
These are the quotes from the reverse of the invitation to `Loopholes`.

Much can be learned by the repitition under different conditions, even if the desired result is not obtained.
Archer J.P.Martin

Repitition is based on body rhythms, so we identify with the heartbeat, or with walking, or with breathing.
Karlheinz Stockhausen.

String theory is an attempt at a deeper description of nature by thinking of an elemenary particle not as a little point but as a little loop of vibrating string.
Edward Witten

Thank you so much to Jacob Whittaker, who is a brilliant artist and my dear friend, for all his work .
What an exellent project, even if I say so myself! 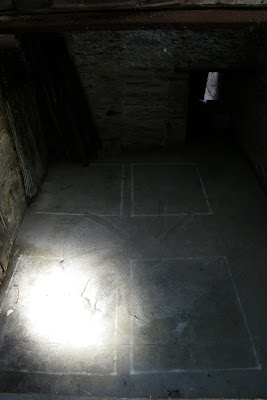 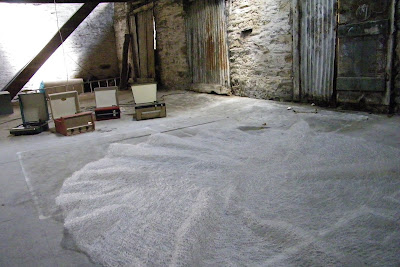 Players and The Fabric of the Universe 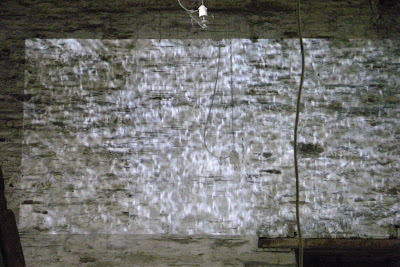 Huge Projection on the Wall 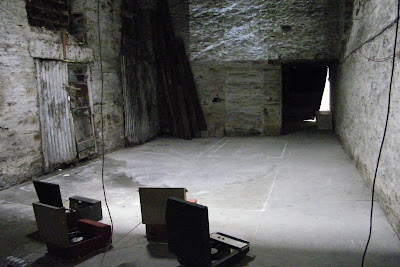 From the back
The back room of The Old Tannery is where the places of the old pits of unsavoryness have been marked out, by archiologists. The room is now a large and open space filled with atmosphere.
The four record players at the back of the space, played four records. With the four tone arms tied to make four aleatoric loops of sound. The players were all found in some way or another , and functioned in an intermediate fashion. The harmonic chorus came from records that were bought the previous day from the charity shop around the corner. They were; two different bird songs recorded at Ynys Hir , the local nature reserve,a song from Richard Rees, a local man who had sung in the Tabernacle next door, and music from a Twmpath, which is a Welsh Barn Dance.
Near to the record players `The Fabric of the Universe`, a piece made from crocheted deep sea fishing line and about 8 feet in diameter,spread, apparently hovvering just above the floor. The amorphic nature of this piece renders it almost invisible, blended with the floors natural textures and the geometric man made markings on the concrete. Its hyperbolic ripples are explored in greater detail by the constant movement projected onto the wall high above. Loops of texture appear to ripple down the walls and drip from the beams.
The relationship between work and space has reached a premium ,`... in a beautiful conversation with each other.`
The space although relativley full, had given our installation an impression of clarity and expansiveness.The installation gave to the space, a vision of the relationship between the unimaginably huge and the invisibly small.
Its quite ironic really. The piece of film that I , personally liked the least has become the strongest piece in our experiments.
To view more pictures from` Loopholes`
Posted by Louise Bird at 13.7.09 No comments: 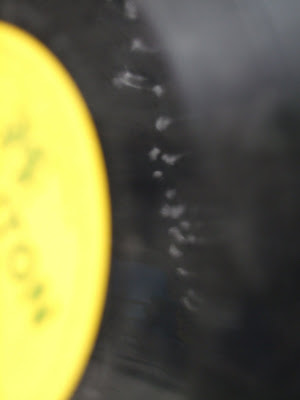 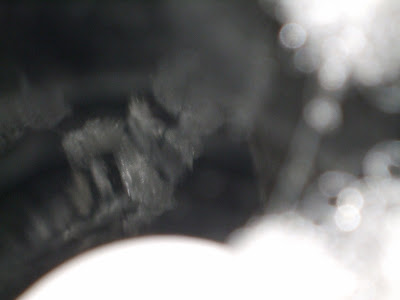 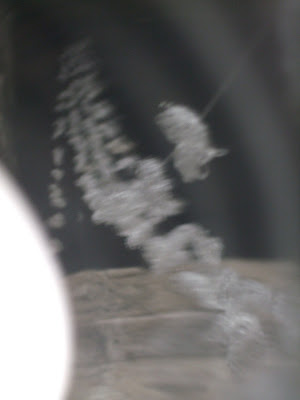 Click here to see a collection of images from Loopholes. 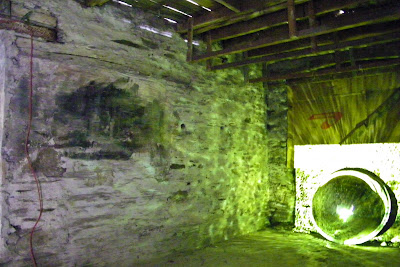 Half in Day Light 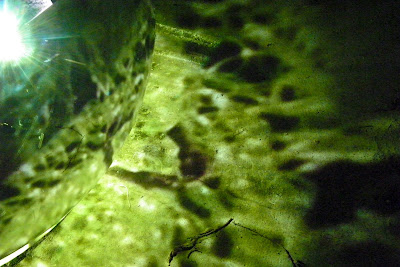 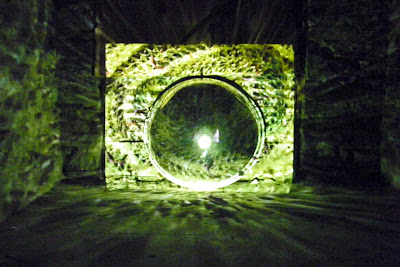 Green- Gold Shrine
The little anti room between the two large rooms appeared to be perfect for the huge convex mirror and film pieces. During the day the space was not really dark enough ,with only one opening covered by a curtain. Anyhow, the room instantly became full of curling mysterious movement. The little dirty dark non- space was transformend into a strange alter to the crocheted loop. We went back later one night and our theories were proven. The room filled completely with the crochet film! The walls, the ceiling and the floor were covered in loops...and so were we. Right inside the crochet. Saturated and mesmerised.
The low ceiling in the little space, made the experience close and intense, especially when crocheting hands ran across the room, fingers like tiny alien creatures tending the textile mass.
How very strange.
Posted by Louise Bird at 9.7.09 No comments:

A short experiment spinning the wormhole around with a camera inside
Posted by Jacob at 9.7.09 No comments: 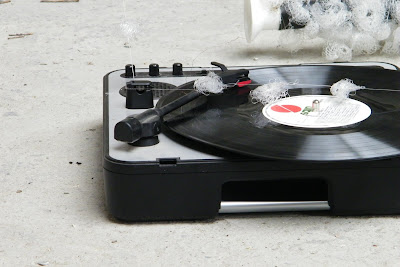 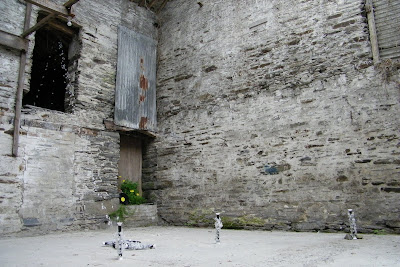 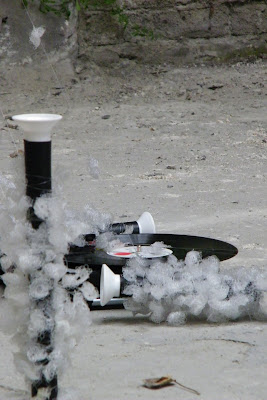 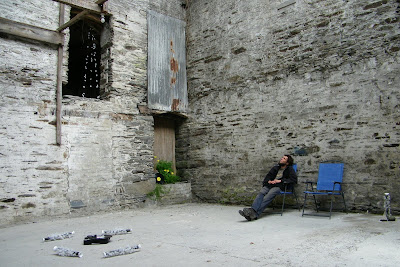 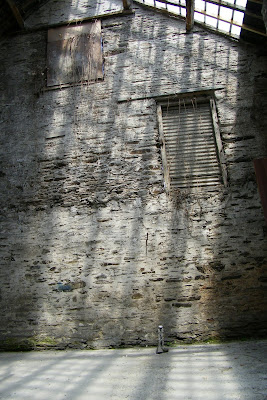 Photon Board game
As you come into the Tannery, by the rotten wooden door, the natural light in the first area is astounding. Clear and bright with transient graphlines that appear and dissappear as the weather dictates. The half of the roof that isn`t leathal, is covered in clear plastic, giving a white light and slightly over exposed look to the installation. Carefully placing a battery opperated record player (Numark), in the spaces between the drips and crumbleing masonary, the tone arm was tied with first one, and after a natural intervention, (it fell down!) three strings of Iota. Experiment #2 had Seven Iota strings that spread from the small hole in the roof, and streched down to the record player below, with a natural grace that could not have been engineered by human hand. This was the first of the many instances, which illustrated the buildings inate ability to make our experimental installations, site specific.
We hadn`t really totally considered how or where we would place each piece of work. There were ideas that we had talked about, and we had brought quite a few pieces with us. The Old Tannery itself was the catalyst in our visual chemistry .
The locally purchased record on the turn table was deliberatly warped in situe, on the dashboard of the car, and played a simple and airy loop of Welsh Harp music. The undulations of the record flicked and plucked at the strings of tiny pale Iota, making minute movements in time to the looped rhythmn. The breeze from the open door often joined them in a gust of chorus, lifting dust particles into the equation.
As the sun illuminated the plastic roof , parts of the floor were turned into a grid. The whole installation was periodically revealed to be a slow and patent game of Photon chess.
Posted by Louise Bird at 8.7.09 No comments: